“Life is either a great adventure or nothing.” ~ Helen Keller 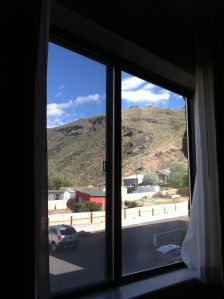 Early bird gets the worm, they say. Catching the American Dipper was high priority on our last day in Yellowstone NP.

To heck with birds; these Texas kids desperately wanted to see some snow.

Bright cloudless mornings are best for photography and for spotting little gray birds that blend into rocks and rapids; they also good for snow. Judging from the window frame, it looked to be a decent day for both.

When we arrived at the stream crossing — the one that was promised to have dippers the day before — was an immediate letdown: the sign read ‘Parking Lot Closed.’ The rapids swelled to take part of the pavement, and since there is absolutely no parking along any of the roads inside the park for safety reasons, we’d have to move on. No dipper. No Plan B either.

Our first stop was to hike at Mammoth Springs, not the lower touristy part down by the village of last year, but up onto the formations of the Upper level instead. A bit off the beaten path, we hoped there would be few tourists.

Turns out we were right. Zero people make for tremendous scenic photos.

We were surprised to see birds there, thinking it to be uninhabitable. An elk cow, rested in the shade just off the path while swallows swooped and swerved overhead, hunting for insects (of which there were apparently a lot) and feeding their young in the rock formations above. Frustrated that I was no good at hand-held heavy-zoom-lens aerial photography, the camera hung on the harness while I watched with eyes instead. The backside of a Violet-green Swallow (here) was the best I could do given the boardwalk limitation. They sure are pretty, nevertheless.

The Rock Wren (here) was first heard, and as we looked to find the singer in our field lenses, Scottie — our avid birder — already knew the species by his song. He’s quite good. A Kildeer family didn’t seem to mind the warm sulfur-smelling water at all and kept us all entertained from the boardwalk as they picked through the shallows. Little fluffy babies with toothpick legs sure are cute.

Next, we went back to the bird oasis where we’d been day before to see if an early morning trip might result in additional birds. On the way there, we spied the Vesper Sparrow (here) and Eastern Kingbird (here) on a roadside turnout where we stopped for breakfast burritos and map-planning.

A view from our favorite birding nook
at Yellowstone

The oasis greeted us audibly as we got out of the truck. Birdies! Angie and I split off from the rest. With field lenses up, she began describing to me all the bird’s features — olive color, finch bill, a little red on his head — as branches and shadows prevented much more detail. All the while, he continued singing.

Using the iBird Pro app on my phone, I narrowed down the possibilities as usual. It’s nice to have the convenience of a thick, heavy field guide in my hip pocket. It was a sparrow of some kind, but there’s just too many of them and I’m really bad with sparrows (LBJ’s = little brown jobs, as they are known to some). None of my studying even helped.

It wasn’t until I selected the state and time of year on the app that the daunting task turned into a more manageable one; we listened to songs and calls of each of the remaining handful of sparrows. Because his song was nearly exactly the recorded one, we nailed it:  Green-tailed Towhee. This was one we would not be able to get back in Texas, so Angie was super-pumped. Another one ID’d with sound!

Dad found the other singer, and added the Clark’s Nutcracker, an unmistakable local variety. Birding as a team is certainly the way to go.

On the way to the mountain pass, we stopped to watch Ruddy Ducks lekking along the water surface (here) with bison grazing on in the background, such a spectacular thing to see first hand, in the moment. There’s a real wildness to this open country that few people understand; by now, we totally get it…and want more of it. Down in the reeds of that lake, Scott spotted another for our list, the Yellow-headed Blackbird, doing his thing (here) to keep it real with the ladies. This is late spring, after all.

We passed a few more streams, but, alas, still no dipper.

Patience was wearing thin like it does with for siblings trapped in a truck, unwilling slaves to their obsessed birding parents. It was high time to find them some snow before someone got pummeled.

The day before when rains chased us off, we had noticed a parking lot with quite a bit of fresh snow on it. As this was a much clearer day with no rain in the forecast, and with a fresh snowfall during the night, this stop would be ample opportunity to reward kids for good behavior.

We pulled in. They poured out of the car and began scaling the frozen slopes, before we could put it in park.

Bears tend to come through trails around tourist-laden parking lots, and they do it quietly, as we learned from a previous encounter. Vigilance and preparedness was key to avoiding unwanted encounters, so Dad and Mom stayed nearby with the bear spray, eyes on the horizon.

The snow was several feet thick and coated in a layer of ice. It seemed like a good idea (to the kids) to use the sloped, snow-covered ground like a slide. Uh, no. Mom reminded them of the pavement below — 4 feet below. They redirected their energy to less risky activity.

This was a summer vacation, and we only brought layering clothes — no cold weather gear. Without water-proof gloves or shoes for snow-tromping, hands and feet can get super cold, super fast. It was only a matter of time.

But kids from Texas wearing Crocs and shorts don’t seem to care.

This would make a great slide!

By the time hands and feet were aching and numb, tummies were also grumble-y for lunch. It would be difficult passing right by the iconic Lower Falls without a photo, so Mom pressed the kids for just one more short hike down and back up before lunch. Judging from Angie’s sleep-walking, it was too much to ask.

Lower Falls Photo Op, Back-lit, People-less
(or one with us in it)

The hike back up is my favorite view.
I could just stay here forever
(as long as the kids stay up ahead).

After lunch, some table naps, and map-checking, we headed out toward Hayden Valley. The day was only half over and we still had not bagged the dipper. Just where was this confounded bird?

So the hunt for the American Dipper commenced once again.

We stopped to view an Osprey nest across the river. It was too far for photos, but a kind nature-lover welcomed the kids to view the family with a high-powered scope on a tripod. Gotta love the kind-hearted grandpa nature types.

There were several lake stops along the way. We picked up the American Wigeon, Bufflehead, Cinnamon Teal and Common Merganser with a decent amount of work. The Great Blue Heron (here) seemed to be everywhere along the roadside creek bridges. I will never tire of seeing them, no matter where we are in the world.

But still no dipper.

All of the large dangerous wildlife was spotted from within the safety of the car (thankfully) or way off in the distance. Masses of people along the roadside were always a clue something worthwhile was there. Even a plain ole Mule Deer grazing in a field might trigger brake lights and cause a new traffic jam. The Black bear elicited ooo’s and ah’s from the backseat, but finally seeing a real live Grizzly Bear sauntering up a hill was the highlight of the day. We were still tourists, after all.

Hayden Valley was as plush and beautiful as we expected, but the abundance of wildlife really seemed to be more in the Lamar Valley the day before. After a good look-see, we turned around and headed back the other way.

That’s when we hit the longest blasted traffic jam. After crawling at 5 mpg for more than 45 minutes, we laughed at the culprit: a single Spruce Grouse, strutting perfectly between the road and shoulder. One driver even got out of his car to shoo it into the grasses, or get it to cross the street, or anything but tie up commuters. Still strutting his stuff when we finally passed him, I was unable to get a clear photo without stopping the truck (which is probably what everyone else was doing, causing the jam). Still, we checked him off our list and enjoyed the hilarity of it all.

Lamar Valley is a great place for nature, but a decent field lens is required for viewing as wildlife is typically hundreds of yards away. Pronghorn, elk, bison, and deer were all present and accounted for. Dad made sure no bears were, though.

The moon as our companion, we finished the day throwing rocks into the lake, stretched our legs,for a good while, then headed back to the hotel to pack to ready for another long day of traveling.

Perhaps we’d even throw back a cold beer (or two) to celebrate a great birding day.

Bird-watching in the distance, the moon to the left

We never did get the dipper, but the adventure in looking for him made for some great memories, still fresh in our minds more than a year later. Perhaps we would find him tomorrow at our next destination: Glacier National Park.

Go to SmugMug Galleries to
view all the photos in this post in hi-res.

Go to Rocky Mountain Birding to view the
birds only in this post.